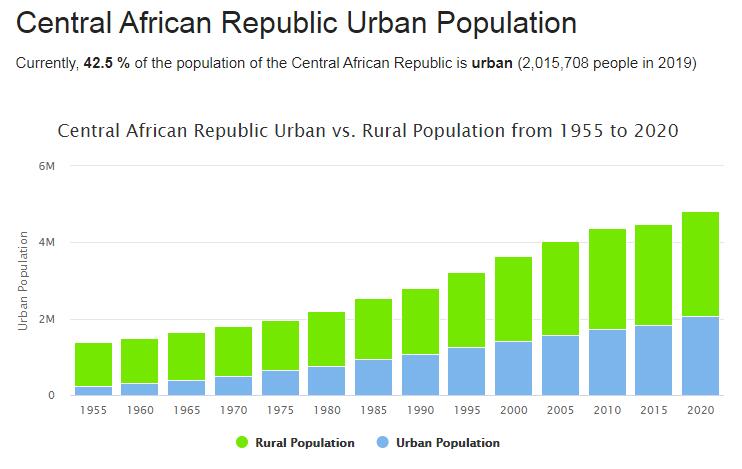 Central African Republic. According to COUNTRYAAH, Central African Republic has a population of 4.666 million (2018). General elections that would have been held during the year were postponed in rounds and were finally announced until January 2011. Parliament decided to extend the president’s term until the election could take place. Otherwise, he would have had to retire in June. The election commission’s lack of money was cited as the main reason why the elections could not be conducted on time. In October, however, it was announced that the work on compiling the lengths of votes could have ended.

In 1988 the population was 2,899,500 residents, corresponding to an average density of about 5 residents per km 2. The regional distribution of the demographic load is irregular and ranges from less than 1 resident per km 2of the steppe zones of the northern belt to over 10 in the central-southern regions. The capital Bangui had, on the same date, just under 600,000 residents; the other urban centers of the country usually do not reach 50,000 residents. The annual growth coefficient of the population is quite high, settling at around 2.5%; life expectancy at birth is low: 46 years for males and 49 for females. The ethnic composition of the population is quite complex: the Banda (29%) and the Baya (25%) prevail. The illiteracy rate is very high, affecting almost 70% of the total population.

The country suffers from a marked backwardness: according to estimates by the World Bank, in 1988 the per capita income it was around 400 dollars a year but, again according to the same source, in real terms since 1965 it has undergone an average annual decrease of 0.6%. The economy is tied to agriculture: more than two thirds of the Central African Republic workforce are employed in the primary sector, which contributes about 40% to the formation of the national income. Forests and woods cover more than half of the territory (57.5%), the arable land extends for just over two million ha and meadows and pastures reach three million ha. Millet, maize, cassava, rice and citrus are traditional subsistence crops, while cotton, peanut, oil palm and, in the southern section of the country, coffee and sisal are for export. The industrial apparatus is very modest; it employs about 10% of the workforce and contributes 12% to the domestic product. The processing of agricultural products prevails (cotton ginning, oil production); the factories are located in the capital. Mineral resources are modest, of low quality (diamonds and gold) and used by industry: uranium in the Bakouma region (M’Batou), iron in Bogoin for local artisan use. The production of electricity has an installed power of 43,000 kW; electricity production reaches 92 million kWh. The communications system is precarious; the roads have a length of over 20,000 km, but most of them are tracks whose practicability is not guaranteed throughout the year; only a few hundred km are paved. Absent rail transport; in Bangui there it is a river port and an international airport. Of the two navigable waterways (Congo-Ubangui and Sangha, a tributary of Ubangui), only the first can be used for the whole year. The country exports agricultural products (coffee, cotton, rubber) and underground resources (diamonds), imports food and industrial equipment.

In connection with the country celebrating 50 years as an independent state, the government announced that it had decided to re-establish the former dictator and self-proclaimed emperor Jean-Bédel Bokassa, 14 years after his death. The government described Bokassa as a “national builder” and avoided mentioning his bloody rule and looting of the treasury.