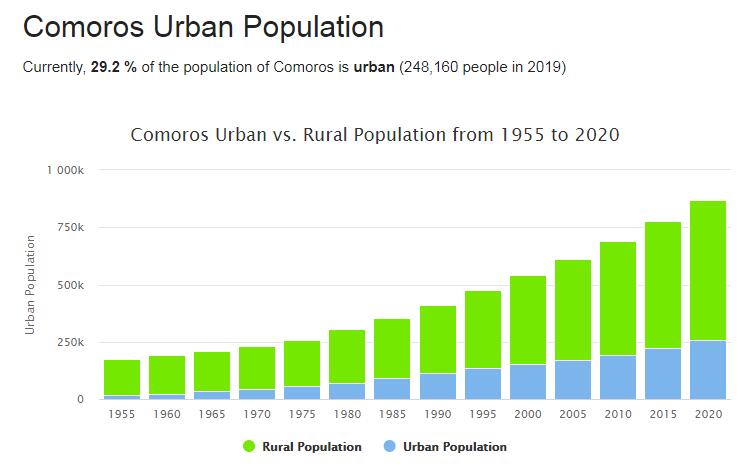 Comoros. In January 2010, President Ahmed Abdallah Sambi postponed the planned presidential election until 2011. Thus, the term of office of Zambi was extended, which should have actually expired on May 26, 2010. The term of office of the Union President had been formally extended from four to five years already in May 2009. Then this and other were approved. constitutional changes in a referendum. According to COUNTRYAAH, Comoros has a population of 832,322 (2018). The opposition politicians said after the referendum that Sambi was only looking to stay in power. They argued that the extension could not be applied to Sambi during the current term, but that he should resign in 2010, as previously stated. According to the Constitution of 2001, the Comoros’ three main islands are to be rotated to appoint a Union president every four years. However, in March 2010, Parliament approved the extension of the term of office of Zambi.

According to softwareleverage, opposition politicians on the island of Mohéli (Mwali), who were in turn to elect the next president of the Union, had boycotted the referendum in 2009. In March 2010, they said they did not intend to accept any extension of Zambi’s term after May 26, 2010. If Sambi remained after this date, it meant the annulment of the 2001 peace agreement on the distribution of power between the three main islands of the Comoros, the opposition said. In April, the African Union (AU) sent a representative to Mohéli for talks, but he was met by hundreds of protesting people and no dialogue could be conducted. The protests lasted for several weeks and got worse when Sambi sent two ministers to Mohéli. There were clashes between the police and the protesters.

On May 8, the Constitutional Court announced that the decision to extend Zambi’s mandate was contrary to the Constitution and would therefore be set aside. According to the court, after May 26, Sambi would lead an interim government until it was agreed when the presidential election would be held.

The army urged politicians to hold an open dialogue. At first, the politicians at Mohéli did not want to participate, but with the help of the AU, talks started between the Union government and the governors of the three main islands at the end of May. At the same time, Sambi appointed an interim government that would steer the country to the next election.

In mid-June, with the help of the AU’s mediators, an agreement was reached that the presidential and governor elections should be held on November 7 with a possible second election round December 26. The agreement was signed by Zambi and the governors of the islands of Grand Comore (Ngazidja) and Anjouan (Nzwani). Mohéli’s governor, in his own words, could not attend the signing because he was prevented from leaving his island, but he promised to sign the following day. Under the agreement, Sambi would remain as interim president until the new president could be sworn in during the second half of January 2011. Under the agreement, and according to the previous plans, the new president must come from Mohéli.

None of the candidates in the November 7 election got their own majority. The three candidates with the most votes therefore went on to a second round of elections on December 26. The majority of the votes got Vice President Ikililou Dhoinine from the ruling party. The turnout was 65 percent and, according to domestic and foreign observers, the election was calm and well organized.

Vice President Ikililou Dhoinine from the island of Mohéli also won in the second round of elections on December 26, with 61 percent of the vote. His main opponent, Mohamed Said Fazul, received 33 percent. Fazul claimed that extensive electoral fraud was behind Dhoinine’s victory. But the head of the election monitoring authority rejected the allegations, claiming that the election was largely free and transparent.

The outgoing President Sambi, from the island of Anjouan, welcomed the election of Dhoinine, who had been vice president and Zambi’s deputy for four years. Sambi told AFP news agency that “Dhoinine is a patriot and an honest man who will not be tempted by corruption”.

The 2006 election of Zambi was the first peaceful takeover of power in the Comoros since the country gained independence in 1975.