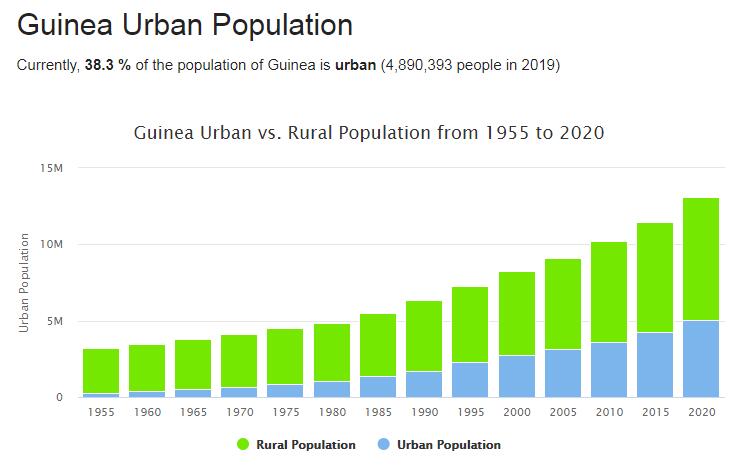 According to COUNTRYAAH, Guinea has a population of 12.41 million (2018). Guinea, which has been ruled by a military junta since the death of President Lansana Conté in late 2008, took several steps toward civilian rule at the beginning of the year. One week into 2010, General Sékouba Konaté invited the opposition to appoint a civilian head of government who would prepare for free elections. Konaté had temporarily taken power in December 2009 after the then junta leader Moussa Dadis Camara was seriously injured after being shot by a person in his own bodyguard. Dadis Camara, who had been taken to Morocco for care, flew to Burkina Faso in early January. From there he made a statement via TV to show that he did not intend to interfere in the upcoming elections.

Jean-Marie Doré, a tanned politician from the opposition alliance of Guinea’s Democratic Union (UDG) was named new prime minister. The government that took office in February included ten junta members, while 24 were taken from the political parties, trade unions or other sections of civil society. A Transitional Council (CNT) with hundreds of members – both military and civilian – was also formed with the union leader Hadja Rabiatou Serah Diallo as chairman. There were also plans to reform the military, with the help of the regional cooperation organization ECOWAS and the UN, to create more professional defense forces. Within the army, there were strong contradictions both between different ethnic groups and between younger and older soldiers, and the junta did not have full control over all groupings.

In February, tensions between various ethnic groups triggered violence around the city of Nzérékoré in the southeast, and at least two people were killed. Reports on rising ethnic tensions also came from other parts of the country.

In February, the International Criminal Court (ICC) ruled that the massacre of over 150 opposition supporters in September 2009 should be considered a crime against humanity. The ICC continued its investigation of what had happened, but would only raise the case if the national courts failed to do so.

In March, General Konaté announced that presidential elections would be held in June. The military junta promised to respect the election results.

In the spring, British-Australian mining company Rio Tinto signed an agreement with Chinese state-owned company Chinalco on iron mining in Simandou, in the southeastern part of the country, near the border with Liberia.

Prior to the June 27 presidential election in Guinea, according to softwareleverage, there were some unrest, but the election day itself could be carried out without major problems. A total of 24 candidates participated in the election, which was hailed as the most free in the country. Most of the votes were received by former Prime Minister Cellou Dalien Diallo from the Union of Guinea’s Democratic Forces (UFDG) and Alpha Condé from the Guinean People’s Party (RPG) with just under 40 percent and almost 21 percent of the votes, respectively. The election’s third Sidya Touré and several other candidates claimed that extensive cheating had taken place. Since none of the candidates got the 50 percent of the votes required for a victory already in the first round of elections, a second round of elections would be held in July. However, the Election Commission decided to postpone it in order to investigate the allegations of irregularities. The election date was then moved forward several times. In September, two high-ranking election commissioners were sentenced to one year in prison for electoral fraud. Tensions increased during the autumn. In October, the candidates canceled their elections after the outbreak of violence in Conakry and at least four other cities, when the two candidates’ supporters clashed. In the north, nearly 2,000 people – most of them from the Fulani people group – have to flee the violence.

On November 7, the second round of elections was finally held. The fight was now between Condé, the opposition leader who was imprisoned several times under Lansana Conté’s rule and who returned to exile in France in April, and Dalien Diallo, who was the country’s prime minister in 2004–06, when he was rumored to have tried to deal with it. the widespread corruption. Ethnic affiliation played a major role in the election, with the candidates mainly winning support from their own people group, Condé at malinke (mandingo) and Dalien Diallo at fulani.

The election day itself was relatively calm, but unrest increased in anticipation of the result that came after a week. It turned out that the 72-year-old Condé had won clearly with 52.5 percent of the vote. Condé made statements about reconciliation and talked about inviting his political opponents into the government. But Dalien Diallo refused to approve the result, citing cheating. Dalien Diallo’s supporters protested against the result, and new violence erupted in several parts of the country. In just a few days, about ten people were killed and 200 were injured in clashes between the two candidates’ supporters. Juntan decided on November 17 to introduce a state of emergency until the Supreme Court decides whether the election was properly conducted.

On December 3, the court ruled that Condé had won the election and that the allegations of irregularities were exaggerated. Dalein Diallo accepted the court’s ruling and on December 21, Condé was able to take over as president. He appointed economist Mohamed Said Fofana as his head of government.