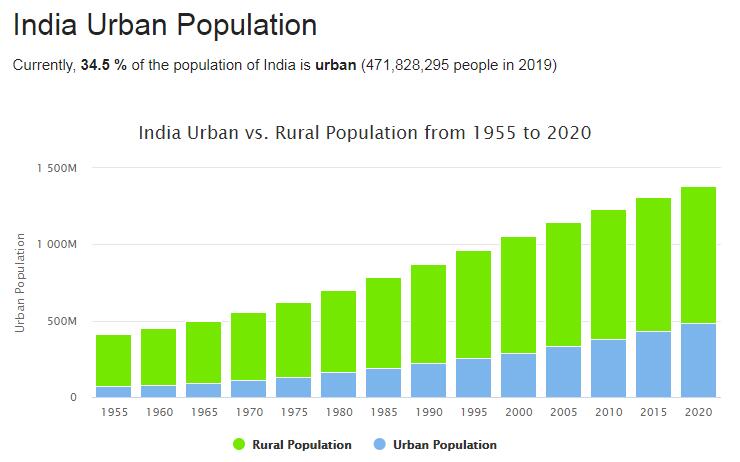 India. The reports on the economic situation gave rise to both optimism and some concern. In August, the annual growth rate was 8.8 percent, just above the government’s forecast, but at the same time the price increase was 10 percent and the central bank raised the key rate six times during the year to curb inflation. During the late summer, growth in industrial production nearly halved compared to a year earlier. In return, the inflation rate also fell during the autumn.

According to COUNTRYAAH, India has a population of 1.353 billion (2018). India’s progress as one of the world’s most important emerging countries requires major investments in infrastructure. The government announced an expansion of the road network at a rate of SEK 700 per year and allocated the equivalent of SEK 60 billion to modernize the railway network. In addition, the equivalent of SEK 1.2 billion was pumped into the debt-laden state airline Air India, while one of the world’s largest terminals was inaugurated at the international airport in Delhi. Auctioning of licenses for third-generation mobile telephone networks provided the Treasury with a contribution of approximately SEK 100 billion.

In March, it was announced that the Russian Federation will build 16 nuclear reactors in India over the next few years, and in August Parliament passed a law permitting private investment in nuclear energy. It paves the way for foreign companies to invest in Indian nuclear reactors. However, the law was only adopted after the government sharply raised the ceiling for damages in the event of accidents.

In November, US President Barack Obama came to visit and announced trade agreements between the countries worth more than $ 65 billion, including sales to India of both military transport aircraft and civilian aircraft.

During a visit by China’s Prime Minister Wen Jiabao in December, an agreement was reached to double trade between the countries by 2015, at an estimated value of about SEK 700 billion.

In a report from the US think tank Global Financial Integrity, it was claimed that since independence in 1947, according to softwareleverage, India lost at least SEK 3 trillion illegally brought out of the country by large companies and private individuals. According to the report, economic crime increased significantly after the liberalization of the economy in 1991.

As a reminder of the topicality of the topic, a huge scandal was revealed in November at the auction in 2008 of the mobile phone’s 2G licenses. The Minister of Telecommunications Andimuthu Raja was forced to resign in order to have sold the licenses to favored companies at a fraction of their fair value, which should have evaded the Treasury around a quarter of a billion SEK. The opposition’s demand for a thorough investigation paralyzed Parliament, which during its slightly more than one month-long winter session could not make a single legislative decision.

A revised definition of the term “poverty” gave another nearly 100 million Indians the right to state aid and subsidized basic goods. A total of 372 million Indians are now classified as poor.

The mining company Vedanta refused on an application to open a bauxite mine in a jungle area in the state of Orissa. The project was feared to cause severe environmental damage and threaten the living conditions of the local population from ethnic minorities. The government also rejected Vedanta’s request for a major expansion of an aluminum smelter in Orissa.

Large companies’ expansion at the expense of the poor rural population is one of the explanations for the increased activity of Maoist guerrillas in a significant part of India. During the year, a few hundred police and soldiers were killed by the Maoists. The government created a new central command to coordinate the counter-offensive of the semi-military forces, which had limited success.

In the Muslim state of Kashmir, new unrest flared up after the shooting death of a young protester in June. Up to October, more than 100 people were killed. The protests then deceived a government delegation to visit the area, detainees were released and an expert commission was set up to try to open a dialogue with the Kashmiris.

In a blast attack on a popular restaurant in the big city of Pune in February, 16 people were killed. A previously unknown Pakistani Islamist group said it was behind the act in revenge for India’s treatment of Kashmiris. However, India and Pakistan took several steps during the year to resume the dialogue, which has been down since the bombings in Bombay 2008. The foreign ministers of the countries met in July and agreed on further contacts. The only surviving perpetrator from Bombay was sentenced to death in May.

India’s diplomatic success was also noted in October when the country was elected to the UN Security Council. The government emphasized that a two-year mandate is not enough; India is keen on a permanent seat in the Security Council.

In September, a court ruled that a disputed temple district in the city of Ayodhya should be shared between Hindus and Muslims. Over 2,000 people were killed in riots in 1992 after Hindu extremists demolished the mosque that stood on the site, where the god Rama was born according to Hindu tradition. The matter went straight to the Supreme Court.

In April, a new law came into effect that guarantees all children between 6 and 14 years of age free tuition. Still, 8 million Indian children were estimated to be outside the school system, though a sharp decline since 2003 when 25 million received no education.