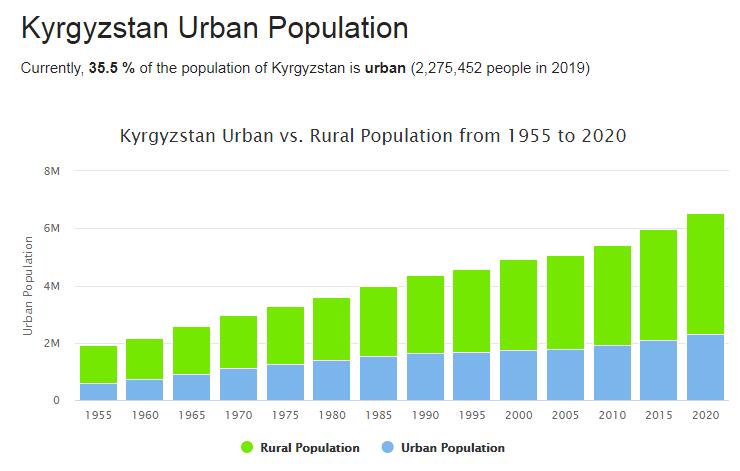 Kyrgyzstan is a country located in Central Asia. Protests against the authoritarian regime turned bloody in April between bloody riots between opposition protesters and riot police in the capital Bishkek. Over 80 people were killed and many hundreds injured. President Kurmanbek Bakijev fled to his home districts in the south where he had strong support, and the opposition took power in Bishkek. Former Foreign Minister Roza Otunbajeva declared Parliament dissolved and headed a newly formed government that promised new elections to the presidential post and a new democratic constitution.

According to COUNTRYAAH, Kyrgyzstan has a population of 6.316 million (2018). In exchange for security guarantees for himself and his family, Bakijev agreed to leave the country. In exile he first declared that he resigned as president but then swore to regain power. He accused the Russian federation of being behind the uprising in Kyrgyzstan. Bakijev was later charged with mass murder in his home country and requested extradition from Belarus. The deposed defense minister was arrested and charged with ordering firearms against unarmed protesters.

Continued violence followed the shift in power. Outside Bishkek, Kyrgyz took over villages inhabited by ethnic Russians and the Turkish people the meshkets, whose homes were burned and looted. Obituaries were required. In the south, government buildings were stormed by supporters of the deposed Bakijev, which led to the shooting of the victims.

The unrest in the south in May turned into ethnic violence between Kyrgyz and the Uzbek, who feel discriminated against. Many people were killed. An emergency permit and a nightly curfew were issued, but the violence was fueled by mafia circles that controlled drug smuggling in the region. The violence worsened in June, when many hundreds of people were killed in the city of Osh in the poor Fergana Valley, and thousands were injured in riots, assassinations and gunfire. The interim government, led by Rosa Otunbajeva, ordered the security forces to shoot to kill in order to stop the violence.

In a report this fall, the human rights organization Human Rights Watch claimed that the military has facilitated armed Kyrgyz gangs to attack and kill ethnic Uzbeks in the cities of Osh and Dzjalal-Abad. The military must have torn down barricades that people have set up to keep the violence away from their housing areas.

The violence led to large streams of refugees. According to the UN, hundreds of thousands of people escaped inland and about 100,000 crossed the border into Uzbekistan before it was closed. When the violence subsided, interim government leader Roza Otunbajeva stated that the death toll was probably around 2,000.

The deposed President Kurmanbek Bakijev was charged in his absence for mass murder in the riots in Bishkek. Deputy Prime Minister Danijar Usenov was also prosecuted, as was Bakijev’s brother, who was the head of the security service.

At the end of June, the authorities were able to conduct a referendum on the proposal for a new constitution. More than 90 percent of the voters approved the new law, but the opposition believed that electoral fraud occurred. According to the new constitution, Kyrgyzstan is supposed to be a parliamentary democracy, where a part of the president’s power is transferred to the government. Ethnic or religiously based parties are prohibited. In July, Roza Otunbajeva was sworn in as interim president.

It was mainly the uz cup that was the victim of the violence in June, but in September five uz cup were sentenced to prison for their part in the violence. The judgments were criticized by human rights organizations. Defense attorneys stated that the convicted and their relatives were subjected to violence.

Despite the violence that has transpired across the country, Kyrgyzstan’s and Central Asia’s first democratic parliamentary elections could be held in October under the new Kyrgyz constitution. 29 parties participated, the turnout was 57 percent and the OSCE described the election as free. However, the election was recalculated following protests from a party that ended up outside Parliament.

The result was a setback for the new leadership in the country. The Socialist and Government-friendly Party of Fosterlands (Ata-Meken) became the least of the five parties that entered Parliament. The party received only 18 out of 120 seats. Deputy President Kurmanbek Bakijev’s Nationalist Party of the Fatherland (Ata-Zjurt) became the largest and took 28 seats. The Fatherland has its constituents among ethnic Kyrgyz in the south who find it difficult to accept the Uzbek minority. Then followed the Social Democrats with 26 seats, the Moscow-friendly Party of Dignity (Ar-Namys) 25 seats and the Republican Party (Respublika) 23 seats.

Difficult coalition negotiations followed. The leaders of the four largest parties traveled to Moscow to talk to the leadership there about the formation of the government, a sign of the Russian Federation’s influence in Kyrgyzstan. According to softwareleverage, social Democrat leader Almazbek Atambayev was commissioned in November to form a government.

In December, he was approved in Parliament as prime minister for a seemingly fragile tripartite coalition. Atambayev’s Social Democrats, who were involved in drafting the new constitution, would try to co-operate with the deposed Bakijev Party of the Fatherland and the likewise Opposition Republican Party.