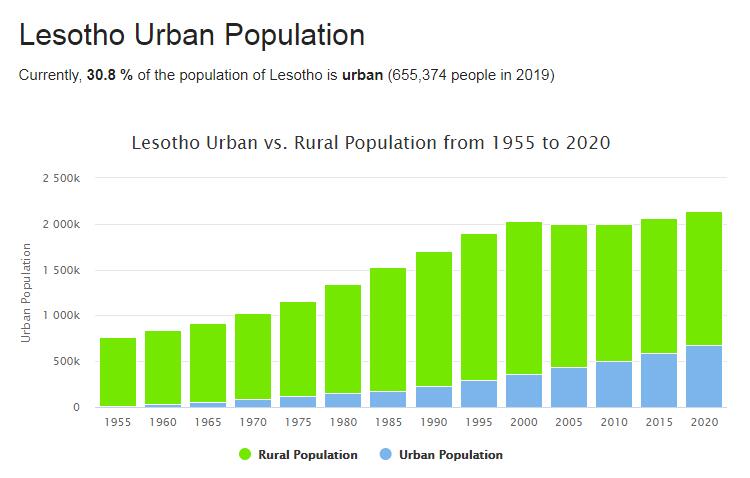 Lesotho. According to COUNTRYAAH, Lesotho has a population of 2.108 million (2018). Several reports during the year on living conditions and economic conditions gave a mostly bleak picture of Lesotho. The small kingdom, on all sides surrounded by South Africa, is becoming increasingly difficult to cope with. Unemployment has risen to over 30 percent since the global crisis hit the neighboring country and Lesotho miners were forced to travel home, and agricultural production covers only about a quarter of the country’s needs. According to softwareleverage, Lesotho’s state budget is covered by 65 percent of revenue from a customs union with South Africa – values ​​primarily generated by the neighboring country – and if that cooperation was terminated, Lesotho’s economy would collapse.

One glimmer of light, which did not saturate any stomachs, was that the so-called Ibrahim Index, compiled by the Somali businessman Mo Ibrahim’s Foundation for Better Leadership in Africa, placed Lesotho as the ninth best country in Africa, even as the seventh best in the category “Human rights and individual influence”.

History. – Totally surrounded by the territory of South Africa, Lesotho found himself facing the attempts of the Pretoria government to condition his policy to prevent him from participating directly or indirectly in the anti-racist struggle. The Lesotho, on the other hand, depends on South Africa for communications, for many services and for the remittances of its migrant workers. In the years following independence (1966), internal political life was therefore based on a precarious balance. Only about a decade after the coup d’etat of 1970, carried out by the premier Lesotho Jonathan, a partial return to normality was initiated with the passing of a law (1983) which restored the old constitution and provided for the formation of an assembly of 60 elected members and no more than 20 appointed members. The elections were scheduled for September 1985, except that, having all the other parties refused to recognize the legitimacy and regularity of the procedure, in August the government canceled them by proclaiming the candidates of the Basotho National Party (BNP) elected for lack of competitors.

The main opposition force, the Basotho Congress Party (BCP), which had a radical and Pan-African origin and to curb the rise of which Jonathan had resorted to the aforementioned act of force in 1970, over time ended up finding himself alongside of the South African government. Therefore, starting from 1980 there was a kind of overthrow of alliances: Jonathan, already accused several times of compromising with South Africa, moved to neutralist positions, approaching the politics of the so-called “ front states ” (the informal bloc of nations lined up against colonialism and racism) and opening up to the governments of the East. South Africa then used all kinds of pressure to force the government of the small and very vulnerable neighboring state to apartheid.

In 1984 the Lesotho refused to sign a non-aggression agreement with Pretoria and the tension increased. Repeatedly South Africa accused Lesotho of being the rear of war incursions into South African territory and in retaliation he carried out raids in Lesotho also using the armored arm of the BCP. On January 1, 1986, South Africa established a real ” sanitary cordon ” all around the Lesotho asking that it expel the ” terrorists ”. The economic situation became unsustainable. On January 20, some units under the command of General J. Lekhanya, who had just been in South Africa for “security consultations”, dismissed the government. The Assembly was dissolved, the parties banned and all executive and legislative power concentrated in the person of the king, assisted by a military council headed by Lekhanya himself.

Relations with South Africa were stabilized in March 1988 on the basis of a formal principle of mutual respect and non-interference. An act of terrorism, which occurred during the pope’s visit (September 1988), prompted Lesotho to resort to the South African security forces. In February 1990 King Moshoeshoe II was deposed “temporarily” by the military junta and in November of the same year he was replaced by his son Moato Secisa who took the name of Letsie iii. A change at the top of the military junta, after a bloodless coup (April 30, 1991), brought col. E. Ramaema, who initiated a process of constitutional normalization. The legislative elections of March 1993 saw the success of N. Mokhele leader of the BCP and the passage of the BNP to the opposition.