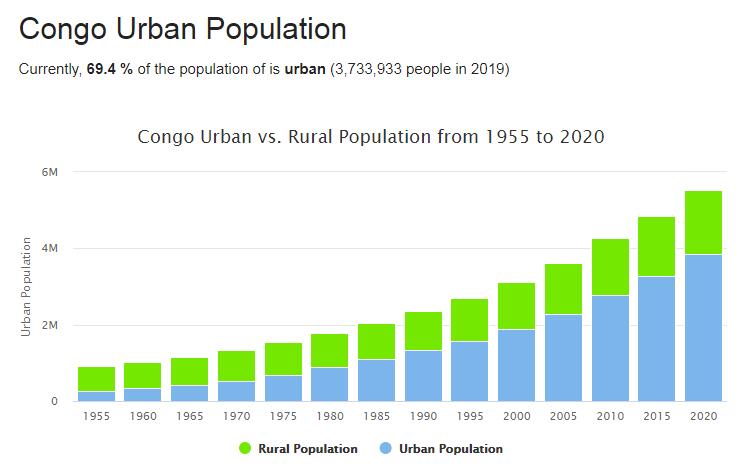 Congo. The World Bank and the International Monetary Fund (IMF) granted Congo a $ 1.9 billion debt write-off in accordance with the program to support the world’s poorest and most indebted states. The two institutions said that the country fulfilled its obligations in the fight against poverty, the creation of macroeconomic stability, the management of the state’s finances and the oil sector, managed its debt repayments and implemented reforms in the health and education sectors.

According to COUNTRYAAH, Republic of the Congo has a population of 5.244 million (2018). According to softwareleverage, Congo, which has experienced many years of civil war and armed unrest, is now helping other African countries to train soldiers for peacekeeping operations on the continent. The first 30 soldiers from 16 sub-Saharan countries were enrolled when the first semester began in October. The school has been started with financial support from France.

A French court decided in November to approve a lawsuit filed by Transparency International (TI) against President Denis Sassou-Nguesso. Prosecutors will investigate whether – as TI claims – he has transferred large sums of state money to private bank accounts in France.

At the end of the Eighties the very serious economic situation, the strong trade union tradition, the never dormant ethnic rivalries, the dissensions born within the single party PCT (Parti Congolais du Travail), in government since 1969, led to the growth of the opposition. D. Sassou-Nguesso, president of the Republic and leader of the PCT, re-elected to the presidency in 1989 for another five years, then began a phase of liberalization by encouraging private companies and opening the country to foreign investment. To favor the democratization of the country, in 1990the PCT called a congress that introduced multi-partyism and the following year a constituent assembly abrogated the old Constitution, drafting a new one, the draft of which was approved by referendum (March 1992).

In the subsequent legislative elections, the UPADS (Union Panafricaine pour la Démocratie Sociale) won 39 seats out of 125, followed by the MCDDI (Mouvement Congolais pour la Démocratie et le Développement Integral) with 29 seats and the PCT with 19. UPADS also prevailed in the elections for the Senate and subsequently its leader P. Lissouba won the presidential elections (August 1992), beating B. Kolelas (MCDDI) and President Sassou-Nguesso (PCT) in the first round, and clearly beating al Kolelas second round with 61, 32% of votes. A governing coalition was then formed between the UPADS and the PCT, but soon the former single party, disappointed by the ministerial assignments, preferred to ally with the URD (Union pour le Renouveau Démocratique), a grouping of parties including the MCDDI. Lissouba then called new elections for 1993, to which the URD-PCT alliance responded with a campaign of civil disobedience that led to a transitional government.

In the following elections, the Mouvance présidentielle (May 1993), a coalition formed around Lissouba, prevailed, but was accused of fraud and illegality by the URD-PCT. The repetition of the elections (October 1993) nevertheless assured her a majority. Despite the URD-PCT having formally accepted the results, the guerrilla warfare between the armed militias affiliated to the various parties was ignited in the country, joined by the protests of the trade unions and students against a government that seemed unable to face an economic situation always more precarious. In the summer, restrictive measures were taken against the trade unions and the press; in December an agreement was signed between the Mouvance présidentielle and opposition groups to sanction an end to conflicts; in May 1996 Lissouba announced new elections for July-August 1997.

Sassou-Nguesso returned, after an absence of two years, to the Republic of Congo from Paris (January 1997) to officially stand as a candidate in the elections. The conflict between the different factions soon rekindled (June 1997); the capital Brazzaville found itself divided into three sectors, respectively in the hands of the militiamen Cobras of Sassou-Nguesso, Zoulous of Lissouba and Ninjas of Kolelas. After five months of guerrilla warfare, JE dos Santos’ armed aid from Angola, as well as the support of oil companies, which did not like Lissouba’s increase in taxes on crude oil production, and after the failure of sustained mediation from France and some African countries, the president of Gabon, O. Bongo, cousin of Lissouba but at the same time son-in-law of Sassou-Nguesso, allowed the latter to turn the conflict in his favor. The conquest of Brazzaville and later that of Pointe-Noire (October 1997) by the Cobras and the Angolan militias sanctioned the seizure of power by Sassou-Nguesso but not the end of the conflict: the Ninjas did not lay down their arms and continued the guerrilla activity, engaging the government troops, still in the first half of 1999, in violent fighting.