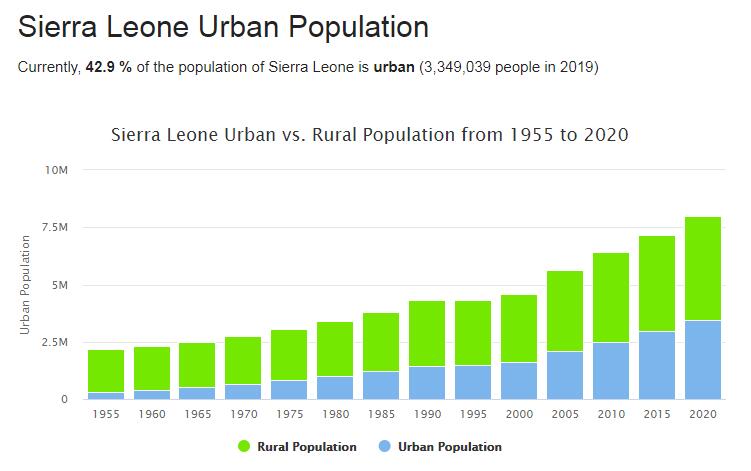 Sierra Leone. The UN Security Council in September repealed the remaining sanctions that have been directed at Sierra Leone since the civil war in the 1990s. The country is allowed to buy weapons again and no leading persons are prevented from traveling abroad. The UN commended the progress made and stated that the government has full control over its territory. At the same time, the mandate was extended by another year for UNIPSIL, the UN organization that helps Sierra Leone to strengthen human rights, democracy and the rule of law and to fight corruption.

According to COUNTRYAAH, Sierra Leone has a population of 7.65 million (2018). President Ernest Bai Koroma held a high profile in the fight against corruption. In January, he summoned several corruptly suspected ministers and senior civil servants and threatened them with dismissal. Shortly thereafter, he forced the fisheries minister to resign after being accused of abuse of power by the anti-corruption authority. Later in the year, the head of the central tax authority, his wife and three other persons were also indicted for extensive corruption.

In July, the International Monetary Fund (IMF) made the first disbursement of a three-year US $ 45 million loan intended to support infrastructure expansion and strengthen the financial system. According to softwareleverage, Sierra Leone has reason to look with some optimism for the future. The country has large reserves of diamonds, gold and oil that can be properly utilized to help alleviate poverty. In the first half of the year, diamonds were exported for USD 51 million, an increase of 43 percent compared to the same period in 2009.

A ten-day strike among health care workers in March ended with the president agreeing to raise their salaries by 500 percent. In April it was also announced that the state will provide free care for pregnant and breastfeeding women and children under five. Many lives are expected to be saved. The maternal and infant mortality rate in Sierra Leone is among the highest in the world.

The demographic and socio-economic situation of the country was seriously compromised by the civil war (1991-2001), which resulted in thousands of deaths and internal refugees. The annual growth rate in 2009 was estimated at around 2.1%; the average life expectancy is 55 years; infant mortality, still very high, is around 81.8%. Density is particularly high in the coastal area of ​​Freetown and in the inner southern lowland. The ethnic composition of the population is very articulated; in addition to the minority of former slaves, founders of the colony, the so-called Creoles, employed in the main administrative activities and settled mainly in the capital, there are numerous other groups. The Mandingo group (26%) is characterized by its settlement in the southern areas and by a strong vocation for agriculture and fishing; the northern area is instead inhabited by Temne (24.6%), Limba (7.1%), Kuranko (5.5%) and Peul, the latter mainly dedicated to breeding. Despite the improvements in the levels of education recorded in the 1970s and 1980s, the illiteracy rate is still very high (over 70%). About 1/3 of the urban population (38% in 2008) is concentrated in the capital, the main hub of the country’s industrial and commercial activities. More contained is the settlement in the other cities (Bo, Kenema, Koidu, Makeni).

In addition to English, the official language, Sudanese languages ​​and krio (from the Creoles) are also used. The Muslim religion affects 60% of the population; the traditional animist religion is very widespread (30%); Protestants and Catholics follow.