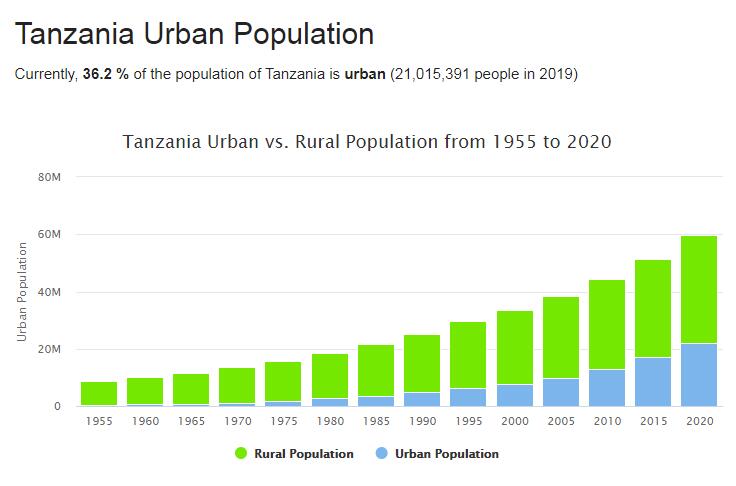 Tanzania. Before the general election this autumn, the rival parties on the Zanzibar archipelago signed a power-sharing agreement. In a referendum, a local constitutional amendment was approved which stipulates that the two largest parties should appoint each vice president and that the ministerial posts should be distributed proportionally between them. According to COUNTRYAAH, Tanzania has a population of 56.32 million (2018). The contradictions on the islands between the ruling Revolutionary Party (CCM) and the locally strong Citizens United Front (CUF) have in the past several times led to violence in connection with the elections.

Then, in October, Tanzania was able to make its first elections without worry. However, voter turnout was alarmingly low, at only 42 percent, and opposition came from opposition to alleged cheating. President Jakaya Kikwete was re-elected as expected for a second five-year term, but his share of votes dropped from just over 80 percent in 2005 to 62.8 percent. The foremost opponent, Wilbrod Slaa of the Chadema Party, received 27.1 percent, much more than any other candidate got in the last election.

According to softwareleverage, CCM retained its dominant position in the parliamentary elections, but backed from 206 to 183 seats. Chadema received 22 seats and CUF 21. These figures also indicated a tendency for a stronger opposition.

CCM candidate Ali Mohamed Shein was elected new president of Zanzibar. When the national parliament gathered in Dodoma in November, a woman was elected for the first time to CCM’s Anne Makinda, the president.

MORPHOLOGY The continental territory of the Tanzania is mainly constituted by a vast strip of the East African plateau. The uniformity of the tabular morphology (average altitude around 1000 m) is moved in the marginal bands by mountain formations originating from a system of faults (Rift Valley) whose course is divided into two branches. The main furrow is the one that marks the western border, along the line of the great rift lakes (Lake Tanganyika, on the border with Congo), and is bordered by mountainous reliefs that in the S culminate at almost 3000 m in Mount Rungwe. To the NE, the minor branch of the great rift is marked by an imposing bastion of volcanic massifs, which culminate in Kilimanjaro (5895 m), the highest mountain in Africa. At the northern end, the plateau slopes down towards the large basin of Lake Victoria ; a E gives way to a large flat coastal region, sometimes covered by marshes and swampy areas, which ends on the ocean coast with a series of sandy beaches, fringed by mangroves and coral reefs. The northern section of the plateau is enlivened by hilly reliefs and depressions that host some lake basins (Rukwa, Manyara, Eyasi, Natron). ● The most important watercourse is the Rufiji which, with the Ruvu, the Wami and the Pangani, flows into the Indian Ocean after having collected the waters of the coastal plain; the other rivers are lost in the marshes of the inland basins or enter the lakes.

CLIMATE The climate is characterized by high temperatures in the coastal region, where, in the monsoon rain season, the humidity is very strong (in Dar es Salaam the average temperature fluctuates between 27.8 ° C in January and 23.6 ° C in July), but in the interior highlands the lower humidity and the altitude allow for certainly better climatic conditions (in Tabora the January average is 22, 5 ° C and that of 21.4 ° C in July). The rainfall is very inconstant, with significant variations both in the year and from region to region. The largest part of the territory, the central one, receives less than 500 mm per year; one fifth has an annual average of 750 mm and only 3% reaches 1250 mm a year or more. The rains are generally concentrated in the season from November to May, with two peaks, one in November-December and the other in April-May.

FLORA AND FAUNA The vegetation is poor and most of the other lands are covered by thin steppes (among which the largest is that of the Masai, to the South of Kilimanjaro) or by a secondary bush (miombo) dominated by the baobab; only the coastal strip is intensely cultivated. Wide spaces find the fauna, today protected by a system that includes 14 national parks and numerous forest and natural reserves, and which covers 40% of the territory.