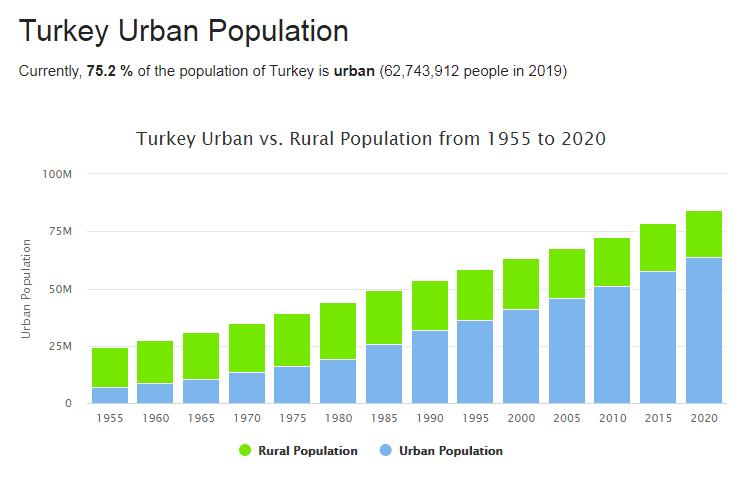 Turkey. According to COUNTRYAAH, Turkey has a population of 82 million (2019). The power struggle further raged between the EU-oriented Islamist government and the secularist opposition based on the judiciary and the military. In a referendum on September 12, the government proposed constitutional amendments that diminished the power of the military courts and the Constitutional Court’s power to ban political parties, and gave Parliament greater influence over the appointment of high-ranking judges and prosecutors. The proposal, which had already been approved by Parliament, was welcomed by the EU but, according to the opposition, meant the secularization of the secular state.

A trial was initiated in December against almost 200 people, most of whom are high ranking officers, suspected of having planned a coup d’谷tat in 2002-03 with the code name Släggan. The plan was said to have included: blast two mosques into the air and then exploit the subsequent riots to show that the ruling party AKP harbored militant Islamism. The dome was the latest in a series of revealed conspiracies involving members of the so-called deep state.

The government’s so-called Kurdish initiatives, which aimed to strengthen the Kurds’ rights, increasingly lost their credibility. A fifteen-year-old girl was sentenced in January to seven years and nine months in prison for throwing stones at the police and shouting slogans in connection with a demonstration in support of the Kurdish PKK guerrilla in the country’s southeast. Ten former PKK rebels, who had surrendered to the military in 2009 for the purpose of testing the government initiative, were brought to trial in June for supporting the PKK. At the same time, the violence escalated as the guerrillas interrupted a unilateral ceasefire.

Several hundred people were arrested during the year for links to the militant Islamist network al-Qaeda. Weapons, ammunition, fake passports and explosives were found in connection with the arrests, as well as documents showing that the organization planned attacks on US, Israeli and NATO interests in Turkey.

The OSCE Security and Cooperation Organization (OSCE) reported in June that Turkish authorities have closed over 5,000 websites, many of them for political reasons.

Prime Minister Recep Tayyip Erdoğan canceled a planned visit to Sweden, and Turkey temporarily called its ambassador from Sweden since the Swedish Parliament on March 11 had determined that Armenians in the then Ottoman Empire had been subjected to a genocide 1915-23. A week earlier, the US House of Representatives Foreign Affairs Committee voted in favor of a resolution that also classified the events as genocide, prompting Turkey to temporarily call its ambassador from the United States as well. The rapprochement with Armenia has stalled since Armenian President Serzh Sarkisian halted parliamentary ratification of the 2009 agreement between the countries in April.

The ban on wearing a headscarf at the country’s universities and colleges was lifted since the government had declared in September that it would support students who were punished for covering their heads.

An homicide of a 16-year-old girl in southeastern Turkey in February attracted international attention. The girl, who had been friendly with boys, had been buried alive. The father was among those arrested for the murder.

The currency of the new Turkish Lira was withdrawn in January and replaced by the old Turkish Lira of the same value. When the new lira replaced the old one in 2005, it was a measure to reduce inflation and a million old lira was then equal to a new lira.

In June, the EU opened a new chapter on food security in the membership negotiations with Turkey. Consequently, negotiations took place in 13 policy areas.

In Syria and Iraq, Turkey’s Islamic allies, IS, were under increasing pressure. On April 26, Turkish fighter aircraft therefore attacked targets in both Iraq and Syria in support of IS. In Iraq, the rogue state of Sinjar attacked the mountain during which 5 Kurdish peshmerga fighters were killed. The attack sparked condemnation from the Iraqi government and from the United States. In Syria, the rogue state attacked a number of YPG positions and a media center, killing 18 YPG fighters. This attack also triggered criticism from the United States. ((Turkey condemned for strikes in Iraq, Syria, Daily Star 26/4 2017)

In May, Erdogan was on a state visit to Washington to put pressure on the United States to make it cease support for the Syrian-Kurdish army YPG/YPJ, which is the only effectively fighting IS in Syria. The attempt failed and the United States announced instead that it would supply heavier weapons to the YPG/YPJ to strengthen its ability to capture Raqqa. In frustration, Erdogan let his security forces attack protesters in front of Turkey’s embassy in Washington. Nine were injured. Up until the G20 summit in Germany in July, Turkey was explicitly instructed that Germany would not accept Turkish thugs’ attacks on protesters in Germany. (‘Erdoğan’s bodyguards’ in violent clash with protesters in Washington DC, Guardian 17/5 2017)

In June 2017, tens of thousands of Turks launched a 400km protest march from Ankara to Istanbul demanding Adalet (justice). The march was organized by the CHP party, which found that Turkey, with its arbitrary mass arrests and massive suppression of freedom of expression, was no longer a democracy. In eastern Turkey, the regime routinely removed Kurdish mayors and deployed its own people from the AKP. (‘We’ve lost democracy’: on the road with Turkey’s justice marchers, Guardian 30/6 2017)

Iraqi Kurdistan conducted a referendum in September 2017 which confirmed by a large majority that the autonomy area should be independent. Turkey coordinated with Iraq and Iran on how this plan should be crushed. According to softwareleverage, Turkey announced to the autonomous government that it would close the border between it and Turkey and stop its oil exports through Turkey. This would effectively stifle self-government financially. However, the collapse happened much faster as the Iraqi army recaptured northern Iraq, which had been under the control of the autonomy. The independence plans were then abandoned. Until then, the United States had supplied weapons to the Kurds both in Syria and Iraq, both involved in the fight against IS. This battle was coming to an end, IS was defeated and the United States then turned its back on the Kurds, orienting themselves towards Baghdad and Ankara.

In October, the regime placed 11 human rights activists on the terrorist court. Among the accused were the director of Amnesty International’s Turkish branch, İdil Eser. Acc. the prosecution had the accused downloaded the app ByLock, which had been used by the coup makers in July 2016 for encrypted communication. That the prosecution could not prove its claim was not an obstacle to sentencing. Both the European Commission and a large number of individual EU countries (but not Denmark) protested against the regime, which however ignored the foreign protest. (Senior Amnesty figures among 11 on trial in Turkey on terror charges, Guardian 25/10 2017)

In frustration over the Kurdish-led crackdown on Turkey’s allies in Syria, IS launched a war in January 2018 against Rojava – Kurdistan in northern Syria. The regime in Ankara had for several years labeled the Syrian Kurds as terrorists and had occupied parts of northern Syria since August 2016. Before Turkey began the war, the Turkish Minister of War visited Moscow to ensure that the Turks were not attacked by Russian aircraft. Russia agreed not to intervene. Both countries used the situation against the United States. Russia wanted to weaken the US-Turkey alliance, and Turkey wanted to mark political and military opposition to the US tactical alliance with the Kurds. From the latter half of January, Turkey daily attacked targets in western Rojava (Afrin) with aircraft and artillery. Syria protested to the Islamist regime in Ankara and sent some units to Afrin, but otherwise the Kurdish YPG/YPJ militia faced the overwhelmingly heavy Turkish armed forces alone. The Turkish attacks cost several thousand Kurdish civilians, and by mid-March had sent around 200,000 Kurds to flight. They naturally did not want to flee to Turkey, but instead sought Aleppo. In mid-February, there were reports of Turkish use of chemical weapons against the civilian population. The Turkish war crimes and the humanitarian catastrophe that unfolded were largely unreported in the Western media, which instead worried about the Assad regime’s attack on Ghouta’s Islamist militias on the outskirts of Damascus. In mid-March, Afrin succumbed to Turkish force majeure, the occupying power hoisted the Turkish flag over the city and the YPG/YPJ then declared it to go to guerrilla attack on the occupying power. (Turkey seeks Russian OK for air campaign against Afrin, Daily Star 19/1 2018; Kurdish doctors report suspected Turkish gas attack in Syria, Daily Star 17/2 2018; Turkey begins assault on Kurdish hero enclave in Syria, Guardian 19/1 2018)