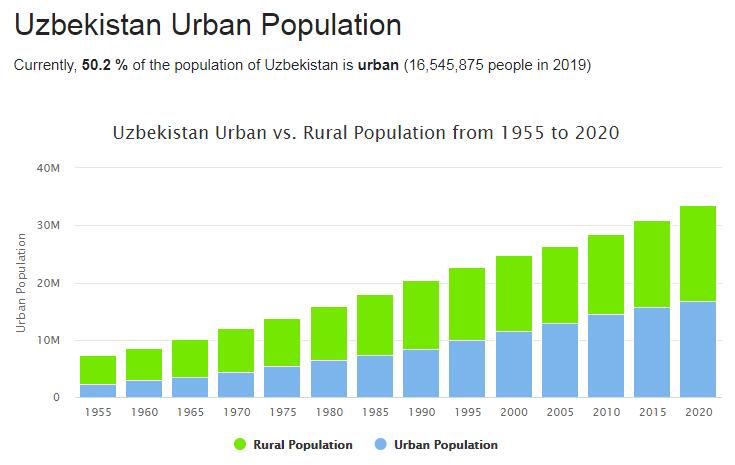 Uzbekistan. In January, the second round of the parliamentary elections started before the New Year. According to COUNTRYAAH, Uzbekistan has a population of 32.96 million (2018). No opposition parties were allowed to participate, and openly opposition politicians were imprisoned or had fled the country. In addition, in practice, Parliament had no power over President Islam Karimov. The parties that were elected were all loyal to Karimov. The OSCE had election observers in place, but only a few. The election was considered pointless from a democratic point of view, but Karimov himself claimed that the election showed that the country was approaching the creation of democracy.

Following a scandal involving 147 children infected with HIV in hospital care, in March 21 people were sentenced to prison for between five and eight years. The care workers were accused of causing the infection through carelessness and poor hygiene. The children were infected in 2007 and 2008, and several of them have since died.

This spring’s bloody political and ethnic conflict in southern Kyrgyzstan had repercussions in Uzbekistan. Tens of thousands of ethnic Uzbeks in the Kyrgyz part of the Fergana Valley fled the violence to Uzbekistan, but the regime there soon closed the border. President Karimov claimed that outside forces were behind the violence in Kyrgyzstan and tried to pull Uzbekistan into turmoil. He called for an independent international investigation.

In August, it was reported that the armed guerrilla Uzbekistan’s Islamic Movement (IMU) has been given a new leader, Usman Adil, after the former guerrilla leader was said to have been killed in one of the US military attacks in Pakistan. The IMU is linked to al-Qaeda and was considered to have grown in strength in recent years.

In November, a new political party, National interests, was formed by lawyer Ruhiddin Komilov, who had his lawyer’s license revoked after defending human rights activists, independent journalists and political prisoners. About 15 people who participated in the founding of the party were arrested and interrogated by police.

An Uzbek imam who moved to Sweden was accused during the year by state television in Uzbekistan for planning terrorist acts against Uzbekistan. He was wanted by Interpol. Shortly before, Uzbek refugees in Sweden had told the media that they were exposed to espionage by the Uzbek regime and that refugees returning to Uzbekistan had been extorted and tortured.

According to softwareleverage, Uzbekistan’s contemporary history is the country’s history after 1991. Uzbekistan was part of the Soviet Union in the years 1924 to 1991, but upon its dissolution Uzbekistan became an independent state and the leader of the Uzbek Communist Party Islam Karimov became president.

In the 1990s and 2000s, Uzbekistan fell victim to several terrorist attacks. Karimov used the attacks to legitimize the political opposition. On May 13, 2005, several hundred protesters were killed by security forces in the city of Andizhan.

Following the terrorist attack on the United States in 2001, Uzbekistan participated in Operation Enduring Freedom, the US war against the Taliban in Afghanistan, and allowed the Americans to use an air base in Uzbekistan.

Independent organizations considered the Karimov regime to be one of the most authoritarian and oppressive in the world. Although there have been some signs of improvement in the human rights situation since Mirziyoyev came to power in 2016, the human rights situation in Uzbekistan is still considered among the worst in the world. The mass media is strongly influenced by censorship and self-censorship. All ethnic minorities are guaranteed full citizenship rights, but many Europeans have moved to Russia, partly for economic reasons.

Human rights organizations have repeatedly criticized the regime for very serious abuses: In 2015, the American human rights organization Freedom House described the country as “one of the world’s worst” when it comes to human rights violations. The few critical journalists and activists in the country are said to have been subjected to torture, wrongful prosecution and forced hospitalization in psychiatric hospitals. A 2013 UN report describes torture in the judiciary as a “systematic” phenomenon that goes unpunished (UN, 2013).

Following the turmoil in the country in 2004/2005, fewer and more international organizations and media have been allowed to operate in the country. Uzbek authorities closed the offices of BBC, Radio Liberty, Freedom House and many more in 2004. Human rights organization Human Rights Watch (HRW) was expelled from Uzbekistan in 2011. International organizations also point to forced labor as a major problem. Around one million Uzbeks – both children and adults – are forced to work on the fall of cotton, which is Uzbekistan’s most important export commodity.