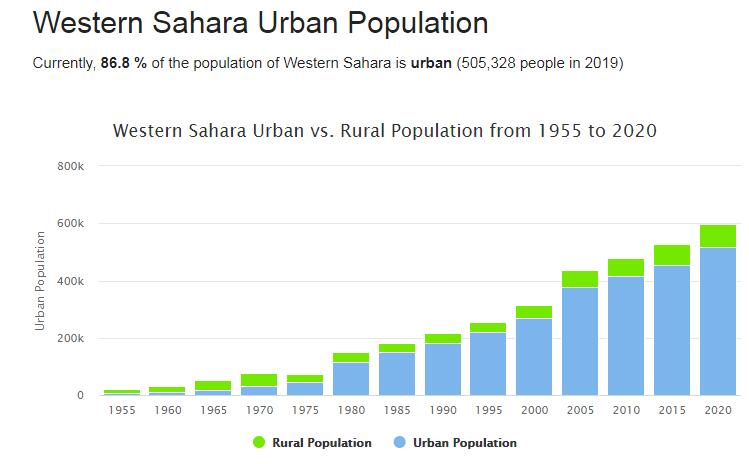 Western Sahara. Violence erupted on November 8 near Western Sahara’s largest city, El-Aaiún, when police stormed the newly formed protest camp Gadaym Izik. According to the Western Sahara Independence Movement Polisario, 36 people were killed. According to Moroccan authorities, the number was killed, of which ten were Moroccan soldiers. About 20,000 people lived in the camp, which was set up in protest of difficult social conditions in the area. Polisario stated that 163 of them were arrested in connection with the storm. The human rights organization Human Rights Watch reported that many of the arrested were battered, tortured and threatened with rape. The storming was conducted the same day as new talks between the parties began in New York. Morocco was prepared to give Western Sahara a measure of self-government, but Polisario wanted a referendum on the issue of full independence.

Polisario and the refugee camps

Polisario was formed as a guerrilla group, but today also functions as a political movement and exile government, with ministers, courts and a legislative assembly that governs tens of thousands of Sahrawis in the refugee camps.

Polisario’s exile government controls the desert areas of the eastern quarter of Western Sahara, but has its base outside Tindouf in western Algeria, where tens of thousands of Western Saharians have lived as refugees since 1975. The climate in the Tindouf area is very inhospitable, and the refugee camps are almost entirely dependent on the international. Algeria, the UN and the international relief agency contribute with food and commodity deliveries. Several private support organizations also carry out auxiliary activities in the camps, mainly from Spain, but also, for example, Swedish Emmaus Björkå.

The refugee camps do not obey Algerian law, but are controlled by Polisario. They are considered well organized. The total of more than 20 smaller camps is divided into four cohesive groups, which are called “provinces” (wilaya) and are named after each western Saharan city: El Aaiún, Smara, Dakhla and Aouserd. There are also a number of smaller camps for administration, warehouses, school operations, and more. During the 1975-91 war years, most of the Sahrawi men were at the front, which meant that the women had primary responsibility for the camps. After the ceasefire, women’s influence has again diminished, but regional measures have remained significant.

The Saharan Arab Democratic Republic (SADR or RASD has been most widely recognized by over 80 states, most in Africa and Latin America. About 50 are adhering to its recognition today. SADR has been a full member of the African Union since 1984 (AU, formerly OAU), but not by any UN body.

Polisario considers itself a liberation front that will gather the entire people as long as the struggle for independence continues. No political parties are allowed in the refugee camps, although the constitution of the SADR promises multi-party systems in a future independent Western Sahara. The general secretary / president is elected every three or four years through the General People’s Congress, which brings together delegates from the refugee camps, the military and various sub-organizations. It is usually held in Tifariti in the Polisario-controlled parts of Western Sahara. Congress also elects the National Secretariat, which is Polisario’s governing body, currently with 50 members. There is also a SADR government, a parliament (Saharan National Council), and several other institutions. The government, or the Council of Ministers, was led in 2003–2018 by Prime Minister Abdelkader Taleb Ombar.

During the war years, Polisario ruled the refugee camps with undemocratic and sometimes harsh methods. An internal power struggle broke out in the fall of 1988, leading to the termination of several senior members. After this and in connection with the ceasefire in 1991, the political climate in the refugee camps was significantly liberalized, and information on abuse has become relatively rare. In practice, however, power remained concentrated in the hands of Mohamed Abdelaziz and a small group of veterans from the early years of the movement.

Polisario / SADR run news agency SPS, a radio station and a TV channel, and issues including the newspaper Al-Sahra Al-Hurra since 1975. In 1999 started the so far only independent magazine in the refugee camps, al-Mustaqbal al-Sahrawi, who since then issued irregularly in small circulation. Unlike the official media, it is sharply critical of the Polisario leadership, which is accused of imperfection and mismanagement of the independence struggle. The Internet is accessible through public computers in some of the refugee camps and appears to be uncensored, although there are indications that radical Islamist sites have been blocked.

Polisario originally had a left-wing rhetoric but abandoned it gradually during the 1980s and 1990s. In 2008, Polisario joined as an observer member of the Socialist International, which organizes social democratic parties.

During the war, Polisario’s armed force (the Saharan People’s Liberation Army, ELPS) was estimated to be approximately 20,000 men. Today it has been reduced to perhaps 6,000 active soldiers. In recent years, the Polisario has threatened to resume the armed struggle against Morocco, including since King Mohammed said in a speech that “Sahara remains part of Morocco to the end of times”.

In the fall of 2014, Polisario threatened to resume the armed struggle against Morocco, after King Mohammed said in a speech that “Sahara remains part of Morocco to the end of times”.