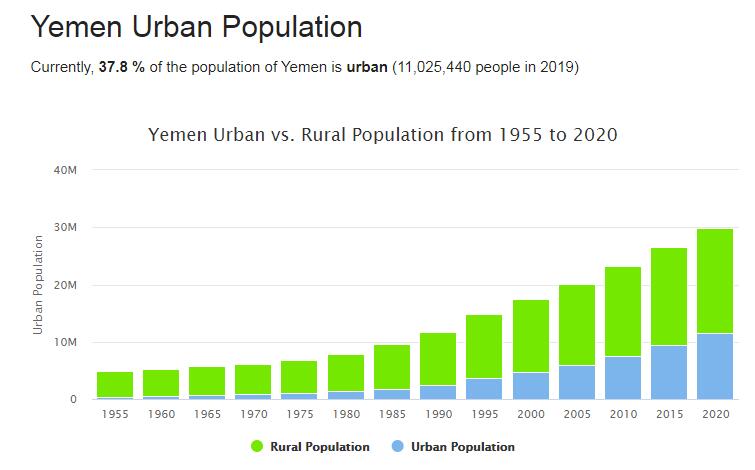 Yemen. According to COUNTRYAAH, Yemen has a population of 28.5 million (2018). The United Nations Food Program WFP warned in March that millions of residents in this poorest country in the Arab world were at risk of starvation. Prior to the food supply of the population, the government prioritized the fight against militant opposition – Shiite Muslim al-Huthi rebels in the north, separatists in the south and, above all, the al-Qaeda network on the Arabian Peninsula. The government stepped up the fight against this regional al-Qaeda, especially in the province of Shabwa where the group was assumed to have its base. Heavily armed al-Qaeda militia stormed a military building on June 19 in the country’s second-largest city of Aden, killing 13 people, including at least four civilians, including one child, and a number of prisoners. Western governments increasingly saw Yemen as a basis for Islamist terrorism after two packages of explosive charges shipped from Yemen on October 29 were found at East Midlands airports in the UK and Dubai in the United Arab Emirates. The packages had been sent with air cargo and at least one was reportedly built to explode aboard the plane. The United States and its allies increased their military involvement in the country. Driverless US attack plan attacks, according to British broadcaster BBC repeatedly, what the US suspected was al-Qaeda targets on the ground. On several occasions civilians were killed.

In the south, the separatist uprising continued. Several times during the year, police forcibly stopped separatist demonstrations, while armed rebels attacked military patrols and government delegations. In northern Yemen, on February 11, al-Huthirbells declared a ceasefire in the fighting with government forces and Saudi troops. As a condition of joining the ceasefire, Saudi Arabia demanded that Yemeni government forces guard the border, that the rebels should withdraw from the surrounding mountains and that all captured Saudi soldiers should be released. According to softwareleverage, Yemen demanded that the rebels release all prisoners, civilian and military, leave all occupied official buildings, lift all roadblocks, give up all weapons, respect the country’s constitution and stop the attacks on Saudi soil.

In August, the human rights organization Amnesty International criticized Yemen for sacrificing human rights in the name of security. In September, for example, 15,000 people were forced to flee their homes in the city of Huta in the south when the government launched an offensive against al-Qaeda.

The humanitarian consequences for the country’s population are disastrous. Large parts of the country’s population suffer from food shortages and lack clean water as well as electricity. According to the UN, millions of people are at risk of starvation and malnutrition. Nearly one million of the population suffered from cholera in the second half of 2017 and more than 2,000 people died as a result of the disease. At the same time, the number of those killed and injured in the conflict is growing. According to the UN, at least 10,000 civilians have died during the first two years of the war.

In 2018, the United Nations appointed Martin Griffiths as envoy with the mission to mediate between the government side and the huhirebells, which has so far been unsuccessful. The situation has been further complicated since the United Arab Emirates mainly came to focus on supporting those who want an independent South Yemen, while the Saudi-led coalition sees it as its task to preserve a united Yemen.

In December 2018, a peace conference was held in Sweden, where both the internationally recognized government and the huhirebells were represented. Among other things, the parties agreed on a ceasefire in al-Hudayda, the country’s most important import port. The battles over the city have stopped the import of, among other things, food, which has led to widespread famine.