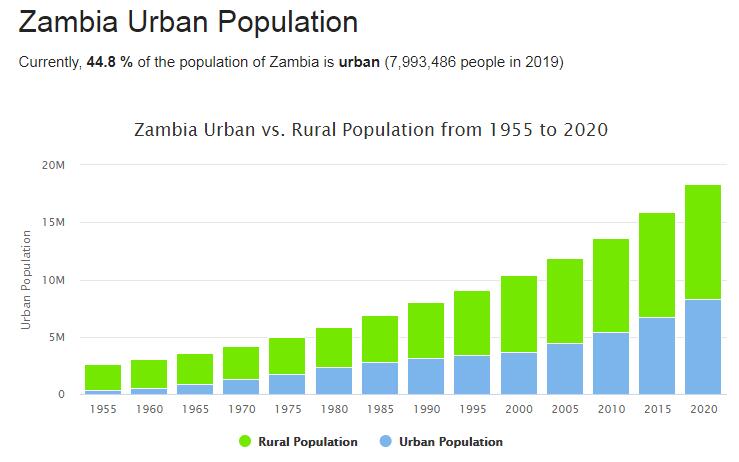 Zambia. During a visit to China in February, President Rupiah Banda signed an agreement with his counterpart Hu Jintao on far-reaching cooperation on geological studies and mineral extraction in Zambia. According to softwareleverage, there was no mention of how much the deal was worth, but China has already invested multibillion in the country, mainly in the mining industry. At the same time, agreements were concluded on Chinese investments in road construction, construction of an industrial zone and economic, technical and cultural cooperation.

According to COUNTRYAAH, Zambia population has a population of 17.35 million (2018). The opposition in Zambia is less enthusiastic about the large Chinese presence and accuses the Chinese companies of ruthless exploitation of Zambian workers. The opposition got water on its mill when Chinese bosses opened fire at a coal mine against workers who protested against poor working conditions. Twelve people were shot.

Mineral exports account for a large part of the country’s income. During the year, 720,000 tonnes of copper were exported, which is said to be the highest figure in 37 years.

The world’s confidence in the current authorities’ sincerity in the fight against corruption is weak. The Global Fund for the Fight against AIDS, Tuberculosis and Malaria – whose money comes mainly from the US, EU and Japan – contained planned aid to Zambia’s health sector due to concerns over corruption. The EU froze money allocated for road construction in Zambia. Sweden stopped some of its support in 2009, but received SEK 6.7 million during the year, corresponding to the sum that had been embezzled.

In particular, the United States has fiercely criticized Zambia after a court rejected a British demand that former President Frederick Chiluba pay back the equivalent of $ 46 million to the Zambian state. A British court found him guilty in 2007 of gross misappropriation of state funds. But the Zambia High Court closed the case on the grounds that a British judgment has no validity under Zambian law. When the government refrained from appealing the court decision, spokesmen for the United States commented that Zambia missed a golden opportunity to prove good governance.

The 2009 sentence of 3.5 years in prison for Chiluba’s wife Regina was revoked by a higher court. The High Court considered that it could not be proven that she purchased private property for state money.

History. – In 1978 S. Kapwepwe, formerly one of the main opponents of K. Kaunda and leader of the dissolved United People Party (UPP), joined the United National Independence Party (UNIP), bringing with it the important Bemba ethnic group, a majority in the Copperbelt area and traditionally not very favorable to Kaunda. However, this reconciliation did not prevent many Bemba personalities from participating in an attempted coup that took place in October 1980. The episode, stigmatized by Kaunda as inspired by South Africa, was linked to discontent, which also spread through UNIP. caused by the difficult economic situation in the country. The persistence of the crisis, which did not abate even after the conquest of independence by the neighboring Zimbabwe, forced the government to apply severe austerity measures during 1982 and 1983. The economic recession was caused by the decrease in copper prices, the Zambian mining monoculture.

The new austerity measures, however, were at the origin of the discontent that during 1984 led to the riots at the University of Lusaka, which was closed on that occasion. Strikes in key industrial sectors were officially banned in March 1985, while the president continued the anti-corruption campaign with glaring purges in the UNIP leadership ranks and in the government. New popular demonstrations accompanied the rise in prices of basic products during that year, and in May 1986 the university was again closed. The political crisis reached its peak in December, when the abolition of the state subsidy on cornmeal (in application of the reorganization measures required by the International Monetary Fund), which caused a price increase of 120%, caused violent clashes in the Copperbelt area and triggered a series of strikes. After abandoning the planned 70% increase in fuel prices, the government announced in May 1987 the replacement of the unpopular plan proposed by the IMF with one of national elaboration, based on a system of state controls.

The lack of international funding was temporarily offset by a rise in the price of copper and a good harvest. 1987 and 1988 saw a series of repressive interventions against the opposition, officially justified with the intention of targeting the conspiratorial activities promoted by South Africa, but evidently motivated by the need to strengthen central control over an increasingly politically unstable situation, for the persistence of the unfavorable economic situation. Relations with trade unions were affected by the wave of layoffs in the public sector which, starting in 1985, affected as many as 11,000 employees. At the beginning of 1988 the Indo-Pakistani community, hit by the restrictive measures in the commercial field aimed at hitting the black market, complained of racial discrimination. In August 1988, at the tenth UNIP conference, it was decided to enlarge the party’s central committee from 25 to 68 members; Kaunda was designated as the sole candidate in the October presidential elections, in which he obtained his sixth five-year term. Meanwhile, the government’s attempt to curb the economic crisis exacerbated discontent in the country: riots took place in the Copperbelt in July 1989 following the rise in prices of essential goods, and in June 1990 the introduction of measures of austerity caused violent unrest in the capital. The economic and political crisis (at the end of June 1990 there was an attempted coup by a sector of the armed forces, which was immediately repressed) prompted Kaunda to promise establishment of a multi-party system and a profound revision of the Constitution. In July 1990 the Movement for Multi-Party Democracy (MMD) was born, led by a former minister, A. Wina, and the president of the Congress of Trade Unions, F. Chiluba. On August 2, 1991, the new Constitution came into force which provided for a multi-party system. Head of state and executive is the President of the Republic, elected for five years by direct universal suffrage, who appoints and chairs the Cabinet of Ministers. Legislative power rests with the National Assembly which passes from 135 to 150 members, elected for five years by universal suffrage. The President of the Republic cannot be elected more than twice. The political and presidential elections were held on October 31, 1991. Chiluba with 75.79% of the votes won the presidential elections, while the MMD secured 125 of the 150 seats in the National Assembly and the UNIP the remaining 25.

In the early nineties, Chiluba’s effort was directed on the one hand to reorganize the public administration and parastate entities, and on the other to relaunch the economy of the country, in which corruption also affected the highest levels of power. Internal political life was characterized by the clash between the government and UNIP (in March 1993 Chiluba declared a state of emergency after the discovery of UNIP documents relating to the organization of antigovernment unrest) and by continuing divisions within the MMD (the National Party, NP, was born in April 1993 following an internal split within the MMD, and in June 1994 seven opposition parties joined in an informal alliance that took the name of the Zambian Opposition Front). At the end of 1994 some austerity measures were taken which reduced the state deficit and the rate of inflation. Despite this, in April 1995 the International Monetary Fund considered that the Zambia had not yet fulfilled the conditions to access the international loan again.

Zambia was frequently the target of retaliation by the Republic of South Africa for its support for the fight against apartheid, and took a central position as coordinator and promoter of the action of the “ front line states ” and the countries of the Commonwealth v Pretoria. In September 1992 the governments of Zambia and Angola signed an agreement on a common control of their borders, and in January 1993 the Zambia contributed by sending about a thousand men to the United Nations peacekeeping mission in Mozambique.