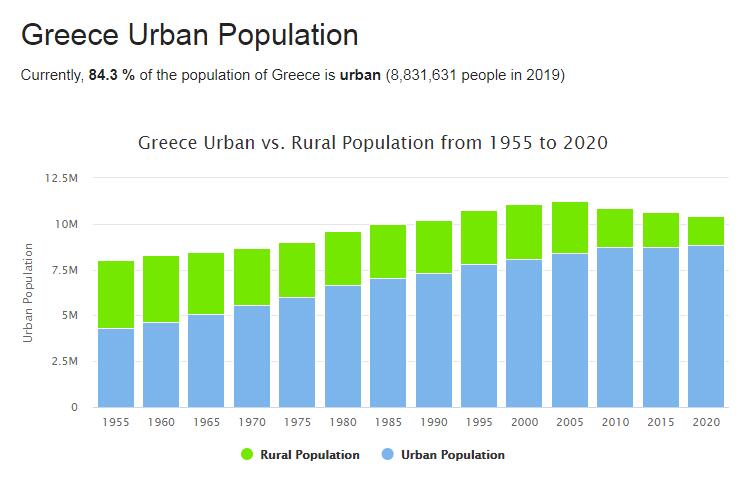 Greece. Heavily pushed by the EU and, above all, by the euro area countries, the Greek government struggled to tackle its debt crisis and prevent the economy from falling freely. An urgent EU survey showed that the 2009 budget deficit had been underestimated and was about 15.4 percent of GDP instead of 12.7 percent as the country’s official statistics had shown. The country’s credit rating was lowered and speculators raised interest rates on loans that the state wanted to take to pay interest on government debt. The situation became unsustainable in the spring and the euro countries, with Germany at the forefront, decided in great anguish in May, together with the International Monetary Fund IMF, to distribute a total loan of EUR 110 billion over three years.

According to COUNTRYAAH, Greece has a population of 10.72 million (2019). The loan was linked to severe austerity. For public employees, a freeze on salaries until 2014, a reduction in bonuses and a salary cap for CEOs were noted. The retirement age in all sectors was gradually increased, the possibility of retiring prematurely was halted, as were the increases in the state-financed pensions. Cuts were made in the health care sector. Taxes were increased on fuel, tobacco, alcohol and luxury products. VAT was increased several times during the year. In addition, the state sold 49 percent of the railroad, parts of some companies, some ports and airports and all state casinos. The country, which had Europe’s highest military spending per inhabitant, also began to cut down on some purchases of military equipment. The 2011 budget included, among other things, increased taxes on property and gambling.

The reforms provoked protests and in many cases the police used tear gas to keep protesters in check. Distrust among Greeks in general was great; During the first two months of the year, savings worth EUR 10 billion were moved from Greek banks to foreign banks. Several economists were also critical, noting that the reduction in public spending helped to curb growth and consumption. The local elections held across the country for two rounds in November were considered a referendum on the government’s handling of the debt crisis and gave Prime Minister Giorgos Papandreou an unexpectedly strong mandate. His social democratic party PASOK won in Athens and Thessaloniki as well as in many other places.

The economic crisis contributed to a further deterioration of the refugee reception and the UN special envoy on the issue Manfred Nowak reported that it was “inhumane and degrading”. The UN urged EU countries not to send refugees back to Greece. Sweden stopped the expulsions in early November; previously Norway, Finland and Austria had done so. After an increasing number of Afghans had begun to try to enter Greece via Turkey, the EU deployed its special border security force, Rapid Border Intervention Teams, in November, which had been set up in 2007 but had not been used to assist the Greek border guards.

At least 14 packages packed with explosive charges were sent from Greece to European governments, European embassies in Athens and international agencies in Europe at the end of October-November. Several of the explosive charges exploded but no human was seriously injured. Two young left-wing extremists were arrested on suspicion of involvement.

Towards the end of 2014, according to softwareleverage, Greece experienced the largest youth uprising since the police killing of 15-year-old Alexandros Grigoropoulos in 2008, when Nikos Romanos went on hunger strike for the right to education from prison. Romanos was a close friend of Grigoropoulos and was present when the latter was shot. Romanos ‘hunger strike corresponded to the annual student rebel flag at Athens Polytechnic University on November 17, 1973 and the anniversary of Grigoropoulos’ death on December 6.

Prime Minister Samaras announced early presidential elections in December, but after three rounds in parliament, the election ended without an agreement on a candidate. The Samaras government was therefore forced to step down and a new parliamentary election was announced on 25 January 2015.

The 2015 parliamentary elections ended with defeat for Samaras and his party New Democracy. The left-wing party SYRIZA, on the other hand, made an impasse and ended with just over 36 percent and 149 out of 300 seats in parliament. Party leader Alexis Tsipras was sworn in on January 26 as Greece’s youngest prime minister in 150 years.

Further negotiation with the Troika

Tsipras’s first half as prime minister was marked by renegotiation of the terms of agreement for repayment of the crisis packages the country had received from the Troika (EU, IMF and ESB). In February 2015, the parties agreed to extend the loan agreement by four months. However, at the expiry of this agreement in June, the parties did not agree to an extension.

Greece has received a total loan amount from the Troika of 240 billion euros, against promises of concrete savings measures and reforms that, among other things, entailed demands for privatization. The majority of the loan has gone to pay off (bailout) crisis-hit national and international banks in Greece. A plan for implementing austerity measures and reforms must be approved by the Troika before Greece can receive more crisis packages.

Without reaching an agreement, on June 27, Tsipras called for a referendum to decide whether Greece should accept the terms of the creditors. The referendum took place on July 5, 2015 and the Greeks were given the choice between voting “yes” or “no” for the new proposals from the Troika on the terms for further loans. The no-side won a solid majority with 61.31 percent, while the yes-side gained 38.69 percent. The turnout was 62.5 percent.

The referendum was a big victory for the SYRIZA government and Prime Minister Alexis Tsipras who had said he would step down if the yes side won. The Greek government interpreted the result as a declaration of support for further opposition to the terms set by the Troika, which for many has seemed harsh. Following the referendum, the government announced that it would resume negotiations with the three lenders, the European Union, the International Monetary Fund and the European Central Bank.