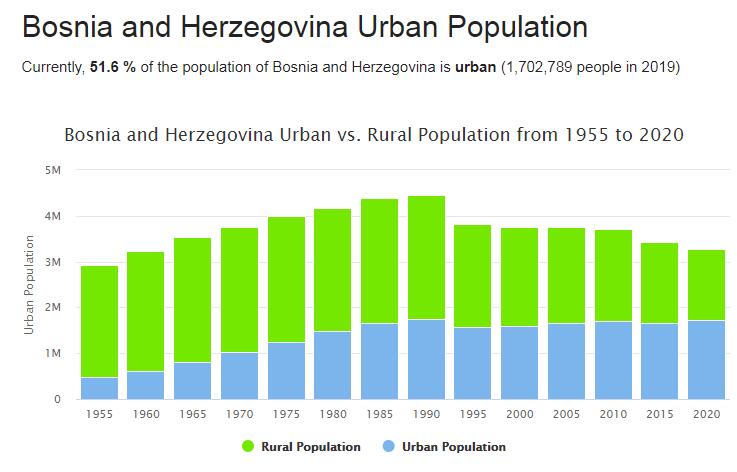 Bosnia and Herzegovina. According to COUNTRYAAH, Bosnia and Herzegovina has a population of 3.324 million (2018). The Bosnian Serbs leader during the 1992–95 war, Radovan Karadžić, gave his first speech in the trial against him, which began last autumn in the UN War Criminal Tribunal in The Hague. Karadžić insisted on running his own defense and denied accusations of genocide and war crimes. He accused Muslims of murdering their own during the war. The massacre in Srebrenica, when up to 8,000 Muslim boys and men were killed, he called “a myth”.

In June, the judges fell to seven high-ranking police and military for crimes in connection with the Srebrenica massacre. Two received life imprisonment and the others between 5 and 34 years. The trial was the most extensive to date in the UN Criminal Tribunal for the former Yugoslavia.

Turkey’s mediation led to a summit in Istanbul in April between Serbia’s President Boris Tadić and Bosnia’s President and Herzegovina’s Presidential Council, Haris Silajdzić. Turkey’s aim was to contribute to the normalization of the relationship, which was still very tense after the 1990s war. After the summit, a declaration was signed to resolve a number of conflicts concerning, for example, border clearing, property and debt.

In connection with the 15th anniversary of Srebrenica’s fall on July 11, 50,000 people gathered to honor the victims’ memory. Nearly 800 newly identified victims of the massacre were buried in a ceremony. More than half of the victims had been identified, mainly with the help of DNA, and buried.

The situation was bleak for the autumn presidential and parliamentary elections, the second since the end of the war. Despite the weak economy and widespread unemployment, the electoral movement was largely about nationalism within the various ethnic groups. Independence claims were made in the Serbian Republic, and Bosnian Croats in the other Republic demanded increased autonomy. The Muslim Bosnians, on the other hand, wanted to strengthen central government.

According to softwareleverage, the elections in Bosnia and Herzegovina were held both at national level and in the two semi-autonomous sub-republics. Bosnian Croat Željko Komšić and Bosnian Legion Nebojša Radmanović were re-elected to the three-headed All-Bosnian Presidential Council, while Bakir Izetbegović was elected to replace Haris Silajdzić as Bosnian representative.

The election to the national parliament gave no clear victory. Two blocks stood against each other: one dominated by the multi-ethnic SDP and the other by the mainly Bosnian Serb SNSD. No government existed at year-end. The same was true in the Bosnian-Croatian region. Former Prime Minister Milo Dodik was elected president in the Republic of Srpska and his party SNSD formed a new government.

The Ministry of Culture created headlines by withdrawing a permit that Hollywood star Angelina Jolie received for filming in Sarajevo. A controversy surrounding the script was reported to be the cause. Jolie, who planned her directorial debut, later regained the state of the film, a love story during the Civil War.

History. – Still marked by the legacy of the war – of which the division of the country into distinct ethno-territorial units and the international presence continued to be visible – in the first decade of the 21st century. the Bosnia and Herzegovina tried to strengthen itself as a unitary state reality, even in its federal conformation. While post-war efforts focused on reconstruction and peacekeeping, starting in 2005, multi-ethnic institutions such as the Joint Army (Union of Armies of the Serbian Republic and Federation of Bosnia and Herzegovina) and the police of Bosnia and Herzegovina gradually began to emerge. confine; while a more balanced distribution of key executive posts allowed federal authorities to assume a greater role in the country’s government. In this context, the consultations of 1 October 2006 represented a fundamental step, as they were the first democratic elections administered entirely by the authorities of Bosnia and Herzegovina. The attempt to consolidate federal institutions, however, clashed with the behavior of thelocal political elites, which often manifested nationalist and secessionist tendencies and monopolized the management of power within their respective ethnic communities (Bosniak, Serbian and Croatian).

Regarding the capture of political and military leaders involved in the war following the break-up of Yugoslavia, a historic turning point was recorded in July 2008 when Radovan Karadžić, former president of the Serbian Republic, was arrested in Belgrade after almost 13 years of inaction. Accused of genocide and crimes against humanity, he was extradited to the Netherlands to be tried by the International Criminal Tribunal for the former Yugoslavia. This was followed in May 2011 by the capture – again in Serbia – and the extradition of Ratko Mladić, one of the main perpetrators of the Srebrenica massacre.

After four years of stalemate in the reform process – focusing in particular on the adoption of the Constitution – over 56% of the voters participated in the general elections of October 2010. Moderates Bakir Izetbegović (son of President Alija Izetbegović and member of the Democratic Action Party) for the Bosnian community and Željko Komšić (Social Democratic Party of Bosnia and Herzegovina) for the Croatian community were elected to the tripartite presidency together with the representative of the Serbian community Nebojša Radmanović (Alliance of Independent Social Democrats), who continued to favor a weak central government model in favor of greater autonomy for the Serbian Republic. The political reality following the 2010 elections saw ethnic political blocs increasingly rooted instead of parties, while the country was left without a government for 15 months. The political difficulties, combined with the malfunctioning of the state machine, also represented important obstacles to the attraction of investments in the private sector, with negative repercussions on the economy and employment.

The growing discontent due to the difficult economic situation, endemic corruption and low levels of trust in the political class, manifested itself in February 2014, with a series of large demonstrations following the green light of the government on the privatization of some of the main state-owned companies.

The general elections of October 2014 reconfirmed the fragmentation of the vote on the basis of ethnic divisions, allowing the three nationalist parties of the Bosnian, Serbian and Croatian communities to strengthen their positions and reducing the prospects for convergence and real political change. Bakir Izetbegović, Dragan Čović (Croatian Democratic Union of Bosnia and Herzegovina) and Mladen Ivanić (Democratic Progress Party) were elected to the tripartite presidency of Bosnia and Herzegovina.